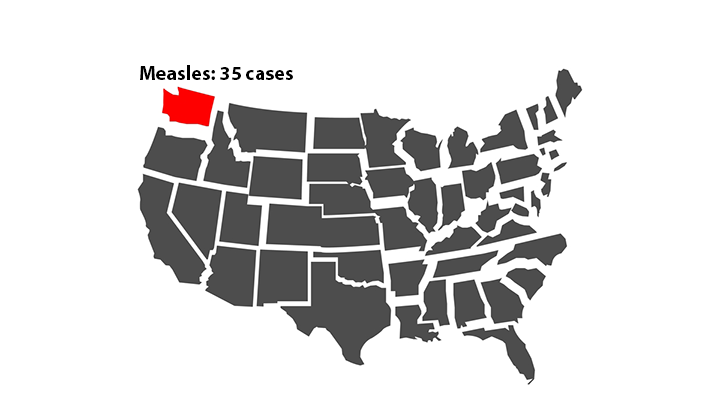 (RxWiki News) After reports of more than two dozen cases of measles, the governor of Washington declared a state public health emergency.

Measles is considered highly contagious. In fact, 90 percent of those who come in close contact with someone with measles will get measles if they are not vaccinated.

Measles is caused by a virus and is marked by a blotchy, red rash. The rash typically starts on the head and then moves down the body.

The best way to prevent measles is through the measles-mumps-rubella (MMR) vaccine. In fact, one dose of the MMR vaccine is about 93 percent effective at preventing measles. Getting two doses increases that number to 97 percent. There is a specified schedule for the measles vaccine, but during outbreaks, the MMR vaccine can be given to infants at age 6 months or older.

Washington health officials said anyone who has been exposed to measles and is feeling sick should stay home to prevent the spread of the virus. Those who might have been exposed to measles should contact their health care providers before going to a hospital or doctor’s office. Arrangements will be made to allow you to get the care you need but also keep you from spreading the virus in a public place.

If you do not have a health care provider, call your local health department. This recommendation holds true for anyone in the US — not just in Washington — who is feeling sick and has been exposed to measles.